If your family name is Cooper, chances are that a relative of yours was a brewer, distiller, or winemaker because a barrel maker is called a cooper (in Danish it would be the same for people with the last name Bødker). It is estimated that there are only some 1,500-2,000 coopers or barrel makers left in the world today. What these coopers have in common are that they make wooden barrels and the most common of them are oak barrels. 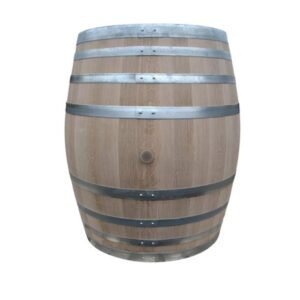 Wooden barrels are much more mobile and storage friendly than stone or clay jars used in the olden days. At an early stage, they realised that oak

barrels would enhance the flavours of the content such as wine and the barrels are even used up until this very day. One of the great qualities with oak barrels, is that the oak wood slowly introduce oxygen into the content of the barrel and even add some notes or characters of the wood itself into the beverage. The chemical connects are a lot more scientific than I will go into depths with, but you can dive into the science here. However, one thing that I want to mention is the main organic compound that is extracted from the oak. This compound is called Vanillin and as the name indicates, it tastes and smells like vanilla. It is also be used to make a synthetic industrial vanilla. Vanillin occurs naturally in oak and the beverage will slowly extract some of it to create its unique flavour. To enhance this process, barrels are charred inside as this brings out the flavour and even adds a caramel note.

It soon became evident that wine was not the only substance that could take advantage from an oak barrel. Soon whiskey, rum, and sherry were introduced to oak barrels as well.

What kind of oak to what beverage?

Oak comes from many different places around the world, so there is plenty to choose from. But the difference in the taste might be more affected by the way, the oak is treated before made into a barrel. My theory is that the main difference is found in the drying of the oak. With air-drying, the oak staffs are dried for a minimum of two years whereas with kiln-drying, staffs are forced to dry faster. In my mind, this makes a difference to the barrel and hereby to the taste. It is said to leave a finer pallet. But I must say, I wouldn’t say no a glass of either one of them. 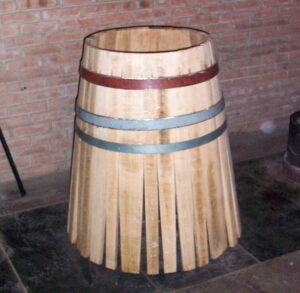 Fun fact: most oak barrels are not 100% watertight after production. It needs to soak in water for several days, so the wooden staves soak up moisture and swell up, making the barrel watertight through pressure against the steel hoops.

In more recent years, bourbon manufactures in US (in particular, the state of Tennessee) have seen a rise in the demand of the brown popular drink, which leads to a larger production. And this means a larger stock of oak barrels. And bourbon cannot just be stored in any barrel. Let’s have a look at the life cycle of an oak barrel:

Today, just about any kind of spirit can be found in limited editions from aged in wooden barrels. This increases the demand for used barrels as they are used many times for many different spirits. Another factor might also be the trends and demands of reduce, reuse, and recycle from the greener generations, where this lifecycle makes the most of an oak barrel.

Several years ago, I was involved in a project where a customer wanted to buy used barrel staves for a furniture and flooring production. I found a supplier of staves of both wine and sherry barrels. The sherry barrels were optimal in size as these barrels are generally larger than other barrels. They were machined and shaped as components and the look was great. 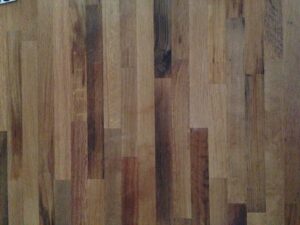 Tabletop made of barrel staves.

A project where an office was getting new flooring and tabletops made from sherry staves was looking good and it had a nice rustic feel to it. It was very well designed, so I wanted to show it to my customer, so he could have a look for himself. However, the smell was not pleasant. The staves still had the odour from sherry production, which was a bit overwhelming. I had the sensation of walking into a good ol’ cowboy saloon in the wild west.

I still have one question remaining. Why is it only bourbon that must legally be aged in a charred new oak barrel and what effect does that have on the content of the barrel? This I’ll dive into next month but until then take a good sniff of that red wine, whiskey, or bourbon (or whatever you fancy) and try to see if you can taste the oak trees vanilla or caramel notes.