It is unfortunate that the COVID-19 pandemic and the ongoing Russia-Ukraine war has now overshadowed the climate change discourse. However, the shift in attention doesn’t make the problem smaller, but it only brings it down the ladder of priorities for decision-makers. The positive part of this whole situation is that the conflict with Russia has pushed Europe to cut down their dependency on oil and gas and look for greener energy alternatives.

The state of European forests

Europe has seen a remarkable increase in forest cover over the years. However, the potential of temperate forests in mitigating climate change is considered smaller than that of boreal or tropical forests. Also, the prolonged changes in climate have left the European forests vulnerable to disturbances. More than half of the European forests have already experienced serious damages from windfalls, insect attacks, or fires. Global warming has largely favoured pest outbreaks in European forests, threating land management for timber production. With climate modelling studies predicting a rise in temperature by the end of the 21st century, Southern and Central Europe and the southern parts of Scandinavia are likely to get fewer showers and Northeast Europe would get warmer and wetter. Thus, climate change could carry on with this trend of insect outbreaks across Europe.

Case studies from spruce plantations in Germany reveal how extreme climatic events like droughts and heatwaves can weaken the trees, which makes them susceptible to insect pests. Droughts are predicted to become even more severe in Germany and such conditions could favour the outbreak of bark beetles on spruce stands. 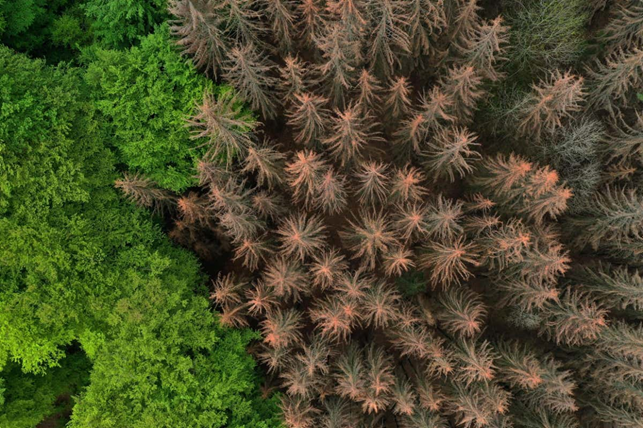 What is climate change and what are its causes?

According to the UN, climate change refers to long-term shifts in temperatures and weather patterns. These shifts may be natural such as through variations in the solar cycle. But since the 1800s, human activities have been the main driver of climate change, primarily due to the combustion of fossil fuels like coal, oil, and gas.

Recent findings show that climate change could jeopardize the resilience of forest ecosystems and their ability to support ecosystem services worldwide.

This climate spiral shows monthly global temperature between the time of the industrial revolution and 2021 and it clearly shows the development of climate changes to our environment.

What can climate change mean for global timber supply?

As seen in Germany, droughts can make economic species like spruce and beech vulnerable to bark beetle attacks. Large and old trees that could earn a higher return are particularly vulnerable to insect pests under conditions of severe water stress. Spruce forests subjected to drought conditions may fail to produce the tough gooey resin that makes them insect resistant. Thus, the land managers are forced to fell the trees before attaining the desirable market dimensions. This makes the production of spruce impractical in the long run and affects its availability in the markets.

Sustainably managed forests as part of the solution

Forests are important not only seen through environmental services like clean air, water, climate regulation, etc. , but also because over 1.6 billion people depend on them for their livelihoods. We need forests in order to build a carbon neutral future in line with the Paris Agreement. Studies show that the average impact of building with 1 ton of wood instead of 1 ton of concrete could lead to an average reduction of 2,1 tons of carbon dioxide emissions over the complete life cycle of the product.

To realise such a future, we need to push more wood into the construction industry. Newer forest management strategies continue to evolve to strengthen the resilience of forests and increase their CO2 absorption rate.  As responsible individuals, it’s now our responsibility to cut down the emissions by shifting towards sustainable energy and building materials, by buying documented sustainable timber to protect the forests. In this way we can combat climate change and help build up healthy and greener ecosystems.

A sustainable bioeconomy for Europe